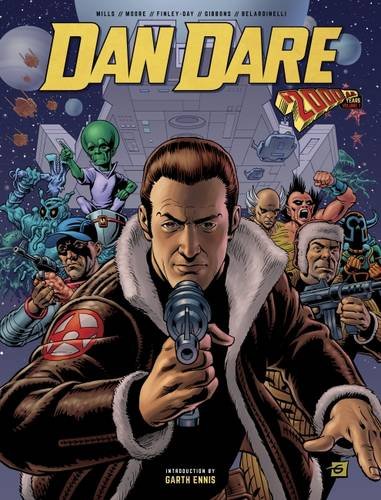 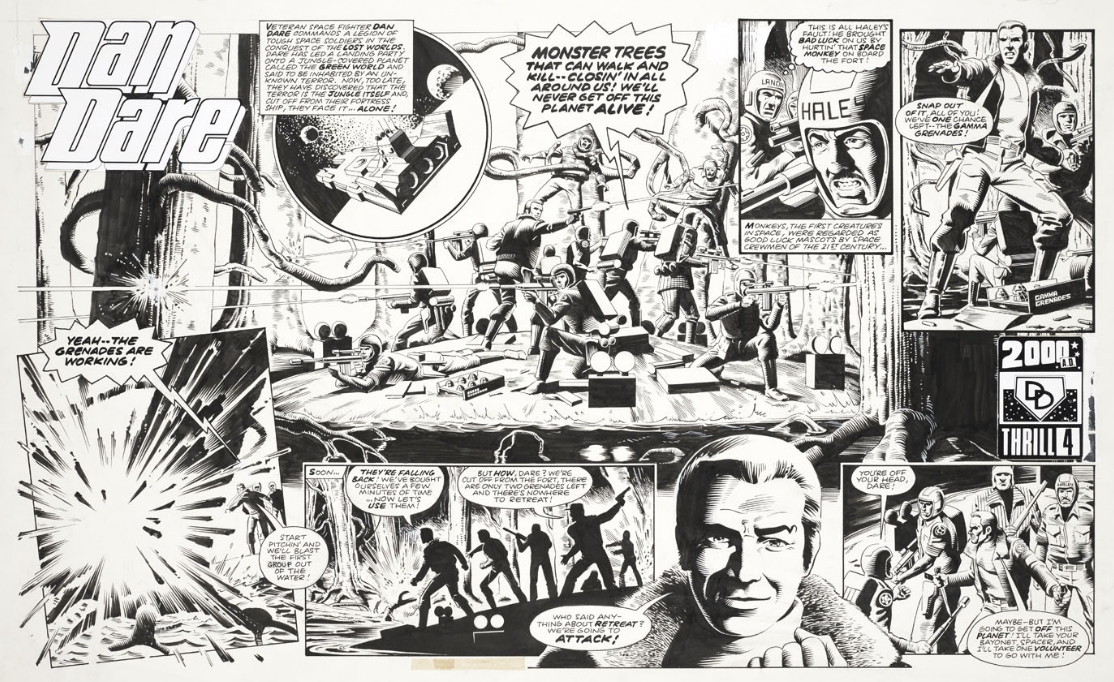 When 2000AD launched in 1977 it was felt that the standout strip would be the revival of a British icon relevant to the fathers of the kids’ at whom 2000AD was targeted. Welcome back Dan Dare, stout-hearted pilot of the future and repository of everything good about British values. It seems odd so many years on, but then hindsight is always wonderful.

Editor Pat Mills realised Dan Dare wasn’t a hero applicable to the turmoil of the mid-1970s, since the post-war optimism that infused the 1950s incarnation had all-but evaporated by 1977. Both socially and culturally these were harsher times. Mills re-envisaged Dan Dare as a battle-hardened warrior, and while not as brutal as those he surrounded himself with, he was still up to doing what needed to be done. Mills’ recollections about the strip are spliced between the earliest episodes.

Massimo Belardinelli is very much a marmite artist. It’s easy to see how any child would be captivated by the flourishes he employs, the detail he packs into his pages, the spartan other-worldly landscapes he creates and his space battles. Set against that, his figures appear weak and weightless, his anatomy is questionable, and his cast are forever pouting. Furthermore his storytelling emphasis is odd. He’d work well on other 2000AD material, but being more interested in ornate backgrounds and monsters than characters, he was never the artist for Dan Dare.

By the time Dan’s prime enemy The Mekon returns Steve Moore has taken over the scripting, but his material meanders and drags. Surprisingly, it’s Gerry Finlay-Day whose Dan Dare is the most captivating here. You have to shove to the back of your mind that he’s meant to be the 1950s hero and take him at face value, but Finley-Day, not always 2000AD‘s foremost writer, supplies a spirit to his work and a viable supporting cast. His roots in serialised boys adventure comics do stand revealed when the material is collected, which of course was inconceivable when produced. His purpose is to shove Dan and comrades through six pages ending with a cliffhanger, and there’s barely a thought applied to a conclusion or overall purpose.

This section is helped no end by elegant art from Dave Gibbons. Visually Gibbons highlights the direct lineage back to the days of Frank Hampson, but his storytelling and figurework are light years beyond what Belardinelli supplied. Brian Bolland also chipped in with some pages or inking when deadlines became tight.

The book is rounded off with a selection of strips culled from specials and annuals by an assortment of creators. Belardinelli is no more convincing in colour, Garry Leach excellent in grey wash, and Ian Kennedy illustrates what appears to be someone’s recycled Star Trek strip. Interestingly, the best of them is anonymous, a tongue a cheek explanation of how the original Dan Dare became the character fit for purpose in 2000AD.

As Garth Ennis notes in his introduction, there’s no point in telling kids what they’re enjoying is a travesty, and many who grew up with 2000AD consider this version of Dan Dare as definitive. It remains to be seen, though, whether rose-coloured glasses will apply, or they’ll consider this as much as a timepiece as the 1950s material now seems. At well over £20 for this hardback, they’ll be paying a premium to discover it.

Dan Dare has been re-booted several times since, and all are better.