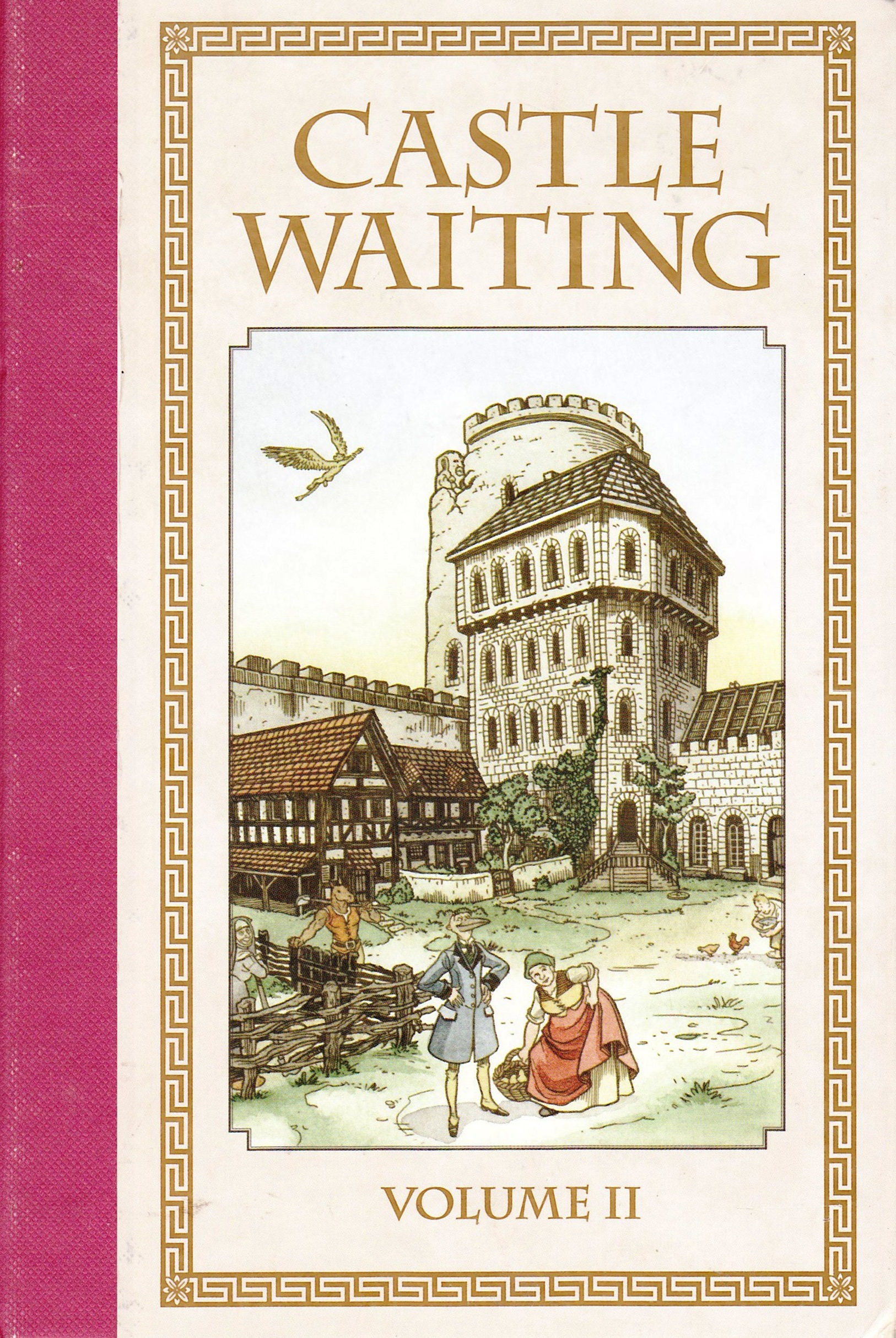 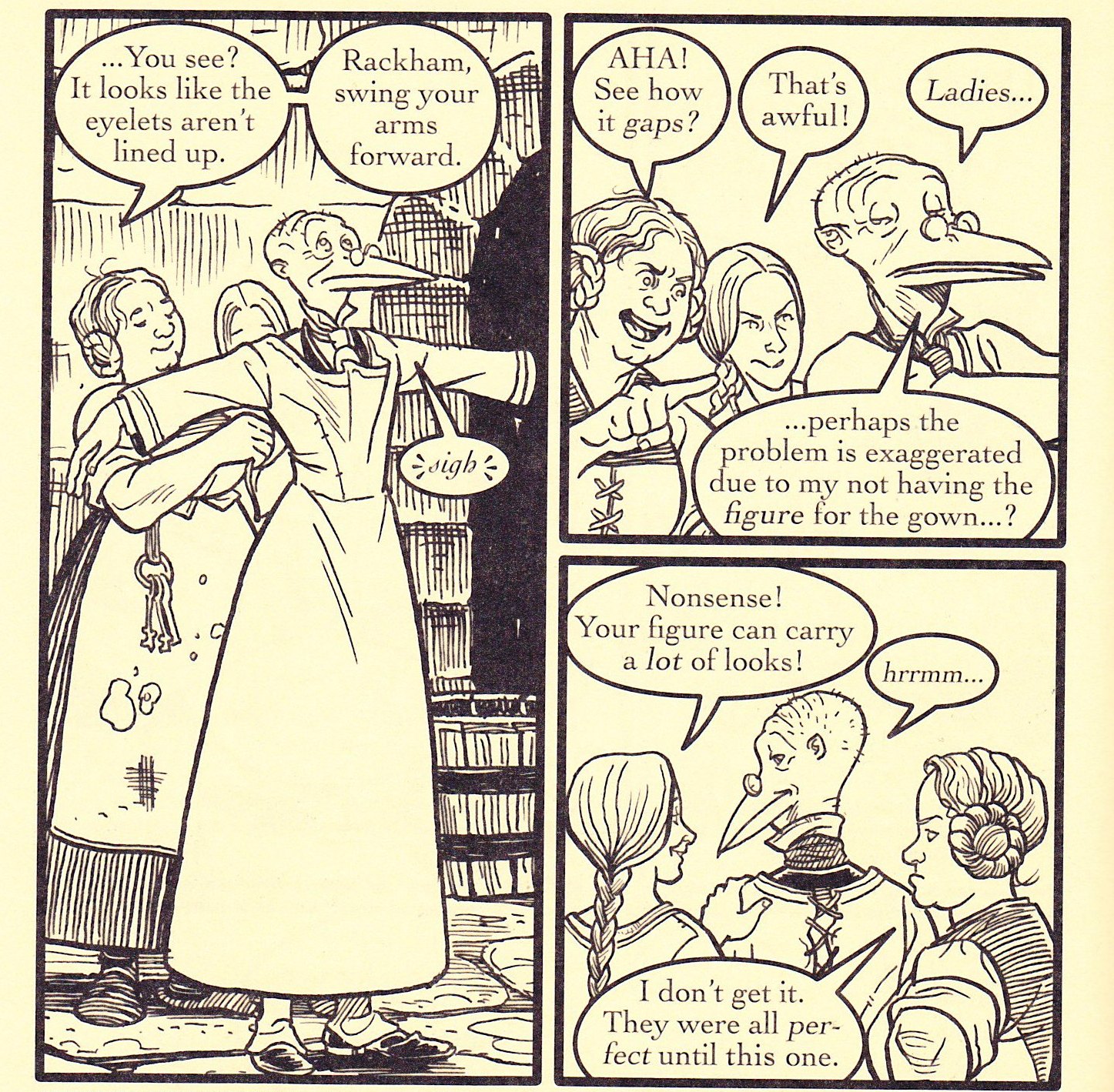 In Castle Waiting creator Linda Medley introduced her cast through Jain, a pregnant woman fleeing her abusive husband. Since then she and her son Pindar have settled in, with Jain appointed custodian of the castle’s vast library. Around Jain and Pindar (or Pin to the residents), Medley weaves her cast’s stories and history. There’s a sad past to quiet blacksmith Iron Henry and Sir Chess has a little problem that leaves him at the mercy of others. The Hammerlings (dwarves) Dayne and Tolly have come to ask a favour of the castle’s ladies in matters beyond their ken, and shed some light on Pindar’s mysterious parentage at the same time.

Castle Waiting‘s charm lies in how Medley brings the seemingly mundane day-to-day interactions of her cast to life with a lovely vibrancy to movements and facial expressions. The impish Sister Peace pinching castle steward Rackham’s caramels is delightfully mischievous while the simple yet faithful Simon learning to read while struggling with his “bowels” and “constipants” is humorously endearing. In a different light Medley reminds us how young Jain is. She’s a responsible mother yet get giddy at the idea of exploring the castle with the equally young Simon and Tolly. It hammers home her predicament and her vulnerability, reminding us that this is unfortunately still a common occurrence. Yet there’s a real world loveliness to everything the cast does in Medley’s meticulous environs, facilitated by clever panel placements enabling the story to flow.

That attention to detail is also present in her writing as she ties up even the most minuscule plot developments without the story veering off towards boring. The ideology of a place where women are accepted and respected as equals is a lovely concept. Its an ideal that has found more traction now, and this (first published in 1997) is prophetic in nature. Like the women, the men are all unique, yet given believable personalities. Sir Chess declares he is above babysitting and scared of breaking Pin, yet discovers another side to himself. Rackham loves the finer things in life, fawning over a well tailored shirt, but will he ruin that shirt by mucking in with any work that needs doing? An important part of the female-scarce Hammerling society is that every male has a role in mentoring the youth. Medley repeatedly bucks stereotypes, yet it only makes the characters more believable. She understands humour is often the best facilitator for this, gently mocking the gender stereotypes that fairy tales and pop culture unwittingly enforce. It’s subtle, but still very funny, and the only quibble is that Volume II ends a little abruptly. The original intention was to publish a third book, but Medley decided to go on a hiatus from the series. The result is a second revised printing ostensibly named the Castle Waiting: Definitive Edition that includes several additional chapters. Despite that, Volume II is as excellent as its predecessor.

In a totalitarian society, Castle Waiting would be banned and burned. It dares to dream of a world where love across boundaries is accepted without prejudice, women are no longer subjugated, and men are free to be themselves. It’s a sad shame that these wonderful notions still offend people as much as they delight. Rumours of a third volume are milling around but there are no concrete developments yet. 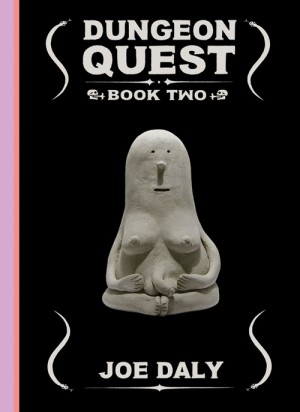 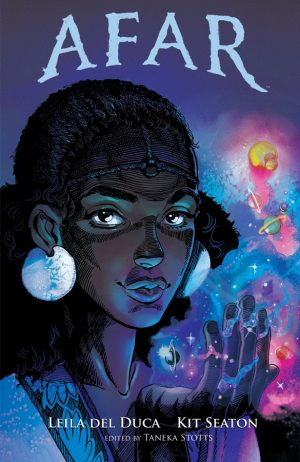