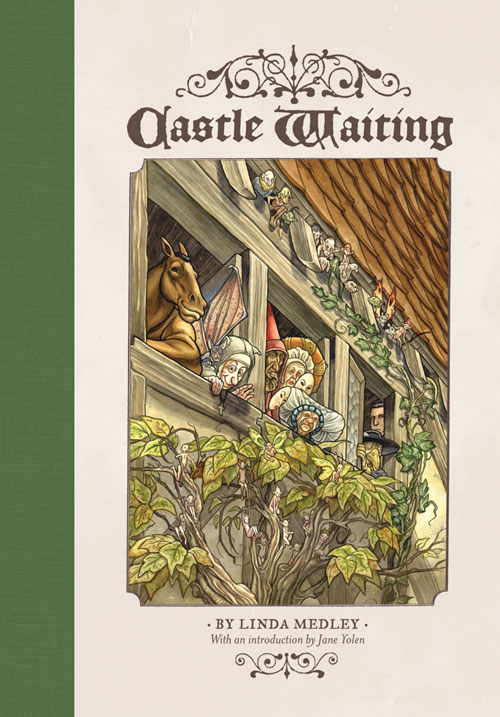 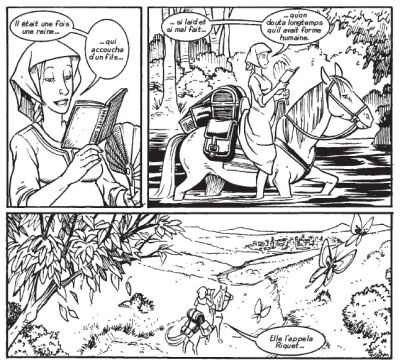 Heard the one about the princess cursed by a spiteful crone to sleep for a hundred years, then be woken by the kiss of a handsome prince? Of course you have! They fall in love at first sight and waltz off in blissful euphoria to live happily ever after far away. Does shacking up with a total stranger strike anyone else as odd? Can a kiss be that good? And what about all the other people who were also under the spell? What do they do now that their ruler has pushed off with some bloke she only just met? What do you do with an old castle over-run by impassable thorny briars? Rent it out as a holiday home? Linda Medley has asked herself these questions and builds a compelling, funny and charming tale around them. In her introduction to Castle Waiting, Jane Yolen extols it as “a feminist fairytale with attitude, heart, imagination, laughter, love and truth”. It certainly is a lovely tale that unfolds on these pages, Medley using comics to parody the traditional fairy tales, folklore, mythology and fables from the world over.

The once abandoned fortress is now named Castle Waiting and has become a safe haven to all seeking refuge. It’s through the Lady Jain, pregnant and fleeing an abusive husband, that we are introduced to the Castle’s truly odd assortment of residents. They come in every size, shape and description as Medley weaves an ensemble cast that is both believable and relatable. All the while she mercilessly lampoons the traditional tropes of female representation in myths and fairy tales in a subtle yet very witty fashion. This is not the angry man-hating feminism people in power warn against, but is as respectful of the men in the Castle as it is of the women. It simply dreams of a world where women can thrive and carve their own identity within it, without having to fall victim to the associated stereotypes that unfortunately still persist. There’s an incredible depth to the cast accentuated by simple, yet expressive cartooning and is juxtaposed against sumptuous environs, conveying both the tragic and  comic elements of life in a style simultaneously old fashioned and modern. It’s enhanced by emulating scenes from various stories, including The Hobbit and The Waterbabies with tongue in cheek. Medley holds great admiration for English illustrator Arthur Rackham (1867-1939), yet she’s not above parodying his romanticism. You will find homages to his work in almost every chapter from Alice’s Adventures in Wonderland to Rip van Winkle. The castle steward Rackham, an anthropomorphic stork, is another homage that bears an uncanny resemblance to pictures of the illustrator. There is so much realism to the players, and you’ll most likely recognise someone you know in Jain, Rackham, the Solicitine nun Sister Peace and a dozen others. Medley is a wonderful storyteller who can have you hooting with laughter one moment then shedding a tear the next, twice over in a chapter.

Castle Waiting pokes fun at stories that have shaped our cultures and what makes them both brilliant and ridiculous. The women inhabiting the pages are unique, beautiful and strong, but don’t conform to societal expectations, and it’s a graphic novel about women, by a woman, that dares to dream hopefully of the future of all mankind. On its debut it won the Eisner Award for Best New Series and Best Graphic Album. This delightful and unique collection continues in Castle Waiting Book II and the Castle Waiting Book II: Definitive Edition. 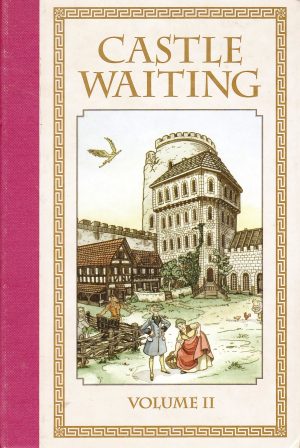