Beyond Time and Again 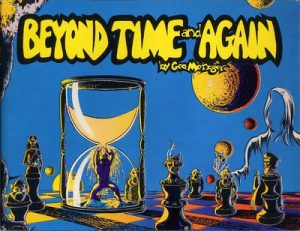 George Metzger was one of many people whose eyes were opened by the emergence of 1960s Underground comics. A talented amateur artist, his interests edged more toward science fiction and fantasy than the usual Underground themes, but there were counterculture newspapers willing to take his strips about Seth of Comstock, wandering a very different Earth during its final days. Metzger produced Seth’s adventures in a newspaper strip format over two tiers, and this 2016 reprint maintains a landscape format. It’s presented almost as a historical document, the original artwork scanned without any process changes showing his notes and printing instructions.

Clunky touches are evident as Metzger finds his way, but after a few pages the artwork begins to transcend the fumblings of an enthusiastic amateur and show a real flair for the use of shadow, to incorporate the Wally Wood style of detailed machinery and apply sophisticated narrative techniques. The writing never quite grows at the same rate. Metzger’s hook is Seth wandering the world searching for the old spells, motivated by learning, and occasionally using a spell in order to extricate himself from a perilous situation. Metzger seems very influenced by Elric, and the strips he finished, collected here, appear to be a prelude of sorts, ending with Seth able to transport himself though time, but they’re ponderous, Seth sometimes emoting as if one of the X-Men. An occasional imaginative idea resonates, but with the feeling that time has robbed much of the early 1970s freshness.

Beyond Time and Again also earns a historical footnote as being among the earliest graphic novels, a hardback originally gathering the forty or so pages in 1976. The Fantagraphics edition is only available as a digital product.