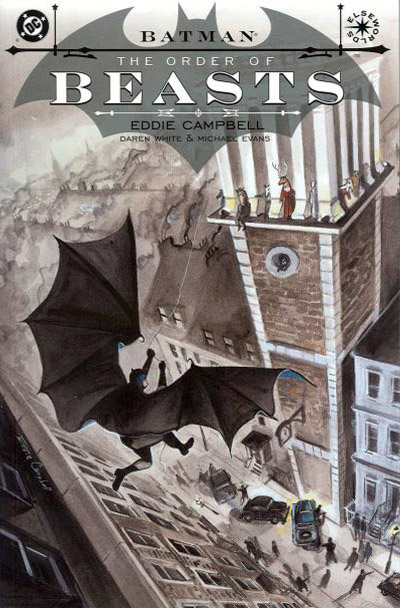 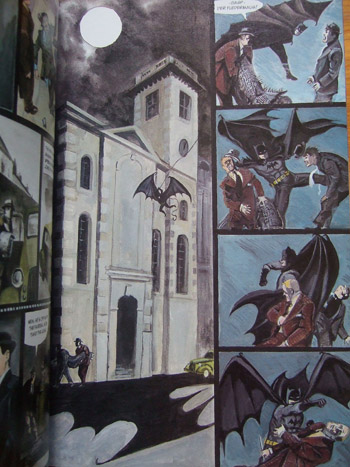 Eddie Campbell tackles The Batman? What next, Frank Miller on Barbie? The Elseworlds ‘What if?’ premise neatly embraces DC’s (and Marvel’s) courting of indie creators (not to mention the growing interest in manga) to inject new blood into the comics mainstream. Campbell has brought his distinctive voice to the likes of Hellblazer, X-Men and The Spirit, but his stint as co-writer and artist on Batman: The Order of Beasts represents his largest commitment to a major, established franchise. And fans of both artist and icon are in for a rare treat.

The year is 1939, the eve of World War II. A young, urbane Bruce Wayne and his faithful majordomo Alfred are visiting London on business, when a series of brutal, mysterious deaths finds his alter ego confronting fifth-column Nazi spies, a fractious cabal of men in animal masks, a lunatic killer and the nuances of Cockney rhyming slang. As Wayne waltzes with London’s high society of privilege and denial, table manners and tuxedos, and ballrooms and steeplechases, his sleuthing alter ego investigates a subterranean world of intrigue and assignation, “of oaths, secrets, handshakes and masks”, and of ritual murder. To solve the mystery, the novice darknight detective gains the trust of Inspector Frank Constantine of the Yard, Commissioner Gordon’s local stand-in, infiltrates the infamous Order of the Beasts to unmask the culprit and discovers that, as the Order’s oath affirms, “Each man must become a beast in order to truly know himself”.

While the evocative and lovingly crafted tour through a bygone London shouldn’t come as a surprise from the co-creator of From Hell, the genuinely affectionate, wry and almost pitch perfect portrayal of a 1930s/1940s Batman is an unexpected delight. Abetted by co-writer and fellow Brit Daren White, The Order of Beasts channels the style and elan of classic Batman artists Bob Kane, Bill Finger and Dick Sprang, while giving the whole affair a modern spin. From Bruce Wayne’s invariably doomed romance and a sympathetic, if lethally unhinged, villain to the implausible disguises and flashes of chillingly surreal melodrama, Bob Kane’s legacy lives on. And though the plot occasionally becomes a little too convoluted for its own good, the book is a refreshing change of pace from recent angst-ridden exercises in Bat-manners.

The art looks gorgeous. Campbell’s detailed, painterly approach fleshes out obvious riffs on the idiosyncrasies of his illustrious 1940s predecessors, while also recalling the American heyday of commercial and magazine illustration.

With its traditional storytelling and rich sense of place, Campbell and White’s Batman is an endearingly old-fashioned, engaging treat that transports readers to a pre-Miller era before creators started strip mining Bruce Wayne’s Dark Knight of the Soul for diminishing returns. It would be a shame if this remained a one-off Elseworlds tale, as it reveals a deft grasp of the Batman mythos and an obvious relish at recreating a vintage Caped Crusader that cries out for further exploration. As Campbell has himself admitted, if he knew selling out would be this much fun, he’d have done it much sooner.