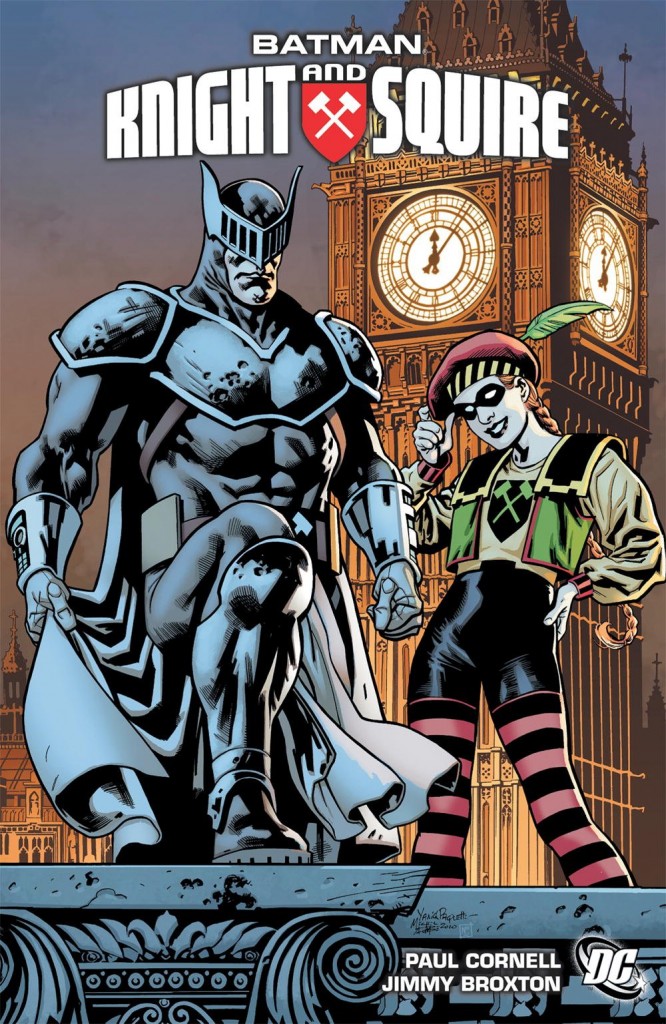 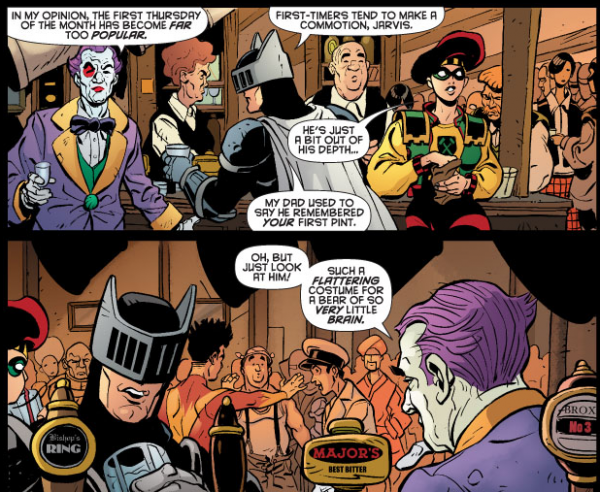 British Dynamic Duo Knight and Squire first appeared during the anodyne 1950s in ‘The Batman of England!’, returning twice more in as part of ‘The Batmen of All Nations!’ and in ‘The Club of Heroes’. Thereafter they lapsed into obscurity until Grant Morrison reconditioned them within The Black Glove in the build-up to Batman Incorporated.

This shot at solo stardom was courtesy of scripter Paul Cornell and artist Jimmy Broxton (with assistance from Staz Johnson), who rather bit the hand that fed them with this witty quirky, quintessentially English fantasy.

It all begins, as most things British do, down the pub. However The Time in a Bottle is no ordinary boozer but the favourite hostelry of the UK’s superhuman community, worthy and wicked alike. Heroes and villains can kick back on neutral ground, enjoying a mellow moment’s peace thanks to a pre-agreed truce, enforced by magical wards dating back to the time of Merlin. The inn is abuzz with crusaders and crazies, all determinedly having a good time. Cyril Sheldrake, current Earl of Wordenshire and second to crusade as the Knight, sends trusty sidekick Beryl – AKA the Squire – to head off potential problems as a number of established exotics tease nervous newcomer Shrike. He’d do it himself but he’s chatting with Jarvis Poker, the British Joker.

When the customary bar-fight starts events take an unconventionally dark turn, and an actual attempted murder occurs. It seems two of the newer, grittier heroes have conspired to circumvent Merlin’s pacifying protections.

There are connecting threads, but all but the final two chapters are self-contained as we see the consequences of resurrecting Richard III, the dangers of unfettered Morris dancers, and another side to the Knight before a well-known villain drops by.

Rewarding us all for enduring decades of “Gor, blimey guv’nor” and clichéd foggy, cobbled-rooftops-of-London tosh from American comics, this witty, action-packed and deucedly dashing outing encapsulates all the truly daft things we noble Scions of Commonwealth love and cherish about ourselves. Surreal settings, outrageous double entendres and daft characters, catchphrases and comedy accents and brimming with cheeky pokes at our cultural follies and foibles, this is the perfect book for anyone who loves grand adventure in the inimitable manner of Benny Hill, Monty Python and the Beano.