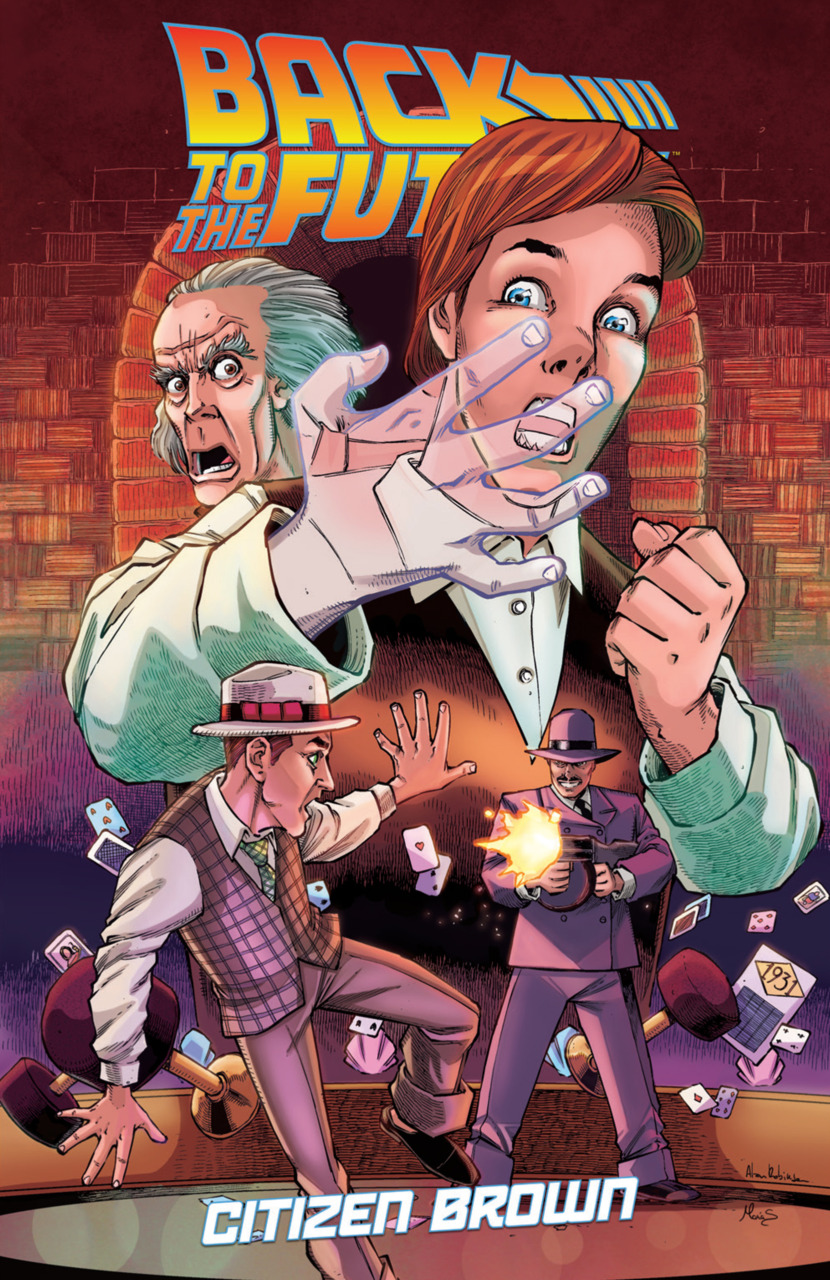 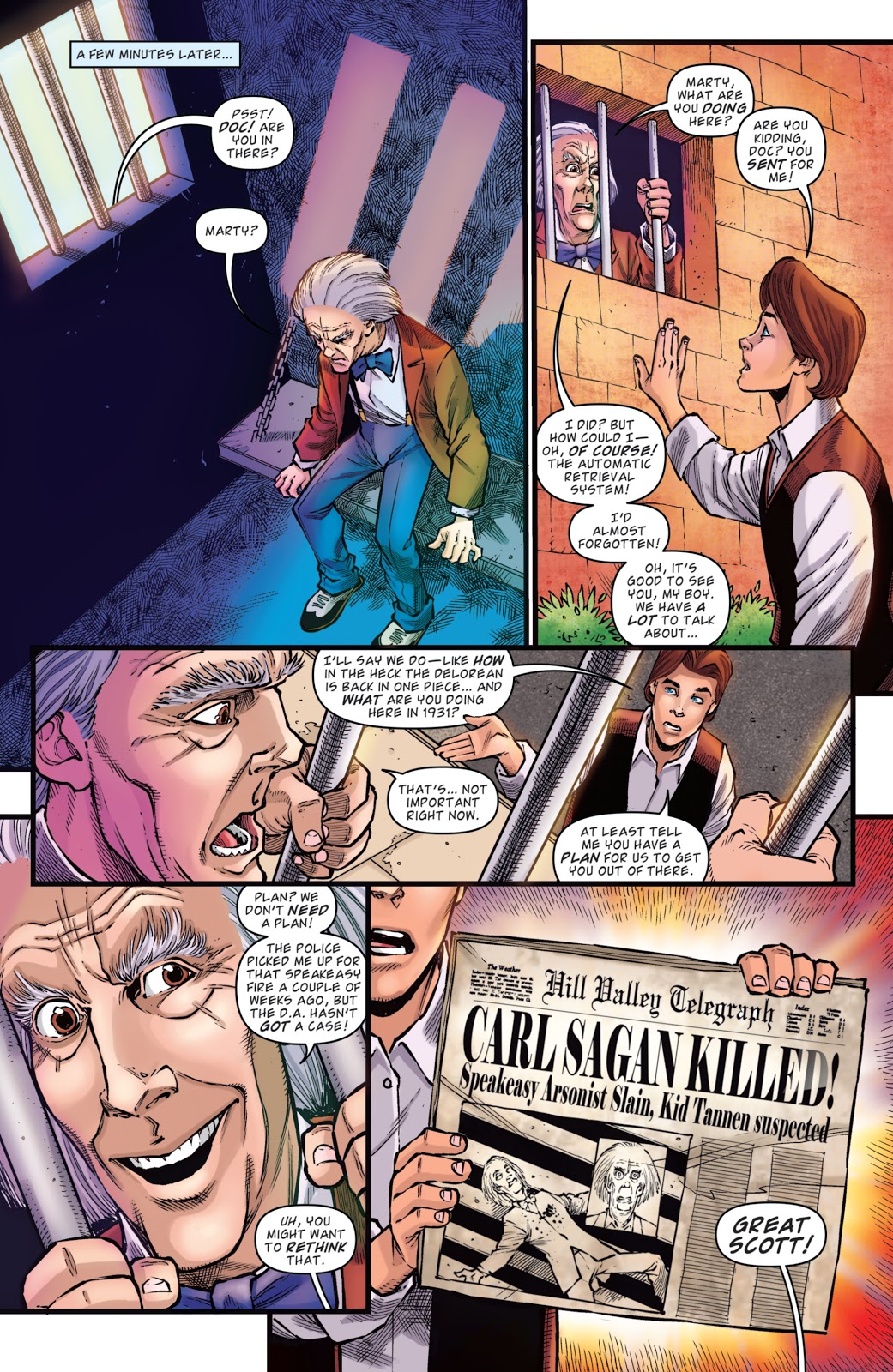 There have been many Back to the Future video games dating all the way back to the 1980s release of the original films, but Citizen Brown is based on is the 2010 version. This had the participation of much of the original cast and Back to the Future’s creative lynchpin Bob Gale was involved in the writing. He’s also credited for this graphic novel, although his introduction clarifies this is on the basis of having co-written the game, with the actual writing here the work of Erik Burnham.

Citizen Brown picks up a few months after the conclusion of Back to the Future III, when all had been resolved and the time-travelling DeLorean had been destroyed. Except it now appears outside Marty’s house with a message from Doc Brown, who’s trapped in time. 1931 to be precise. Can Marty pull him back to the future? Of course, with the future being 1986, some people alive then were around in 1931, including young law clerk Emmett Brown. Also around are Marty’s grandfather Arthur McFly, and a member of the Tannen family, bootlegger Kid Tannen. The point of the game was to have Marty rescue Doc without any knock-on effects that change the future, and those scenarios are effectively transferred to the graphic novel. Marty’s task is complicated by versions of Doc never quite falling into line. The joke names are also there, Marty masquerading as Don Corleone in the past, as assorted unsatisfactory alterations transform the Hill Valley of the future.

While the plot zips along very nicely providing all the elements we want from a Back to the Future story, the art isn’t as accomplished. Alan Robinson’s basic cartoon style is attractive, but the figures, of which there are a lot, constantly draw the eye for the wrong reasons, primarily for large heads that don’t sit well on shoulders, but also for over-exaggerated expressions. Subtlety isn’t one of his watchwords. The art also varies according to which of several inkers works on the pencils, with Robinson best inking his own work.

A new character introduced for the video game has a large part to play. In the 1980s Edna Strickland is a priggish and suspicious old lady with little joy in life, but she wasn’t always like that. She was always motivated by a strict sense of right and wrong, which becomes troublesome. Backing her up is a mystery running throughout Citizen Brown. How is it that the DeLorean was back in 1986 after being smashed in the final movie? The answer to that is revealed in an involved, but very neat final chapter offering plenty of surprises. Reservations about the art notwithstanding, Citizen Brown is a nifty comedy adventure to be enjoyed by anyone who loves the films. 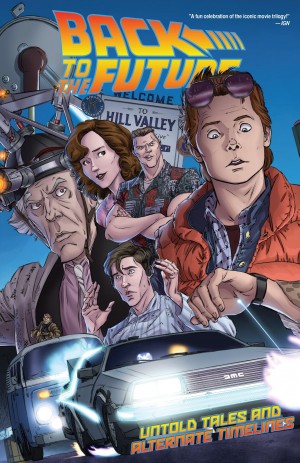 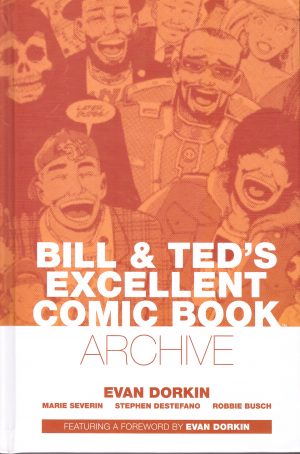 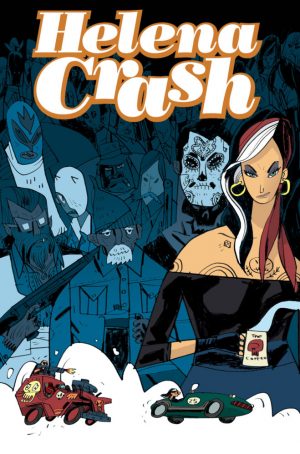