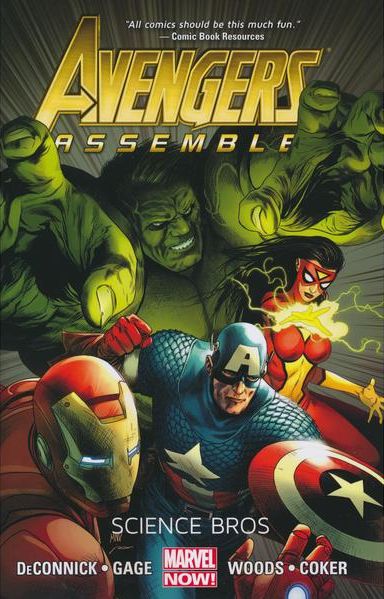 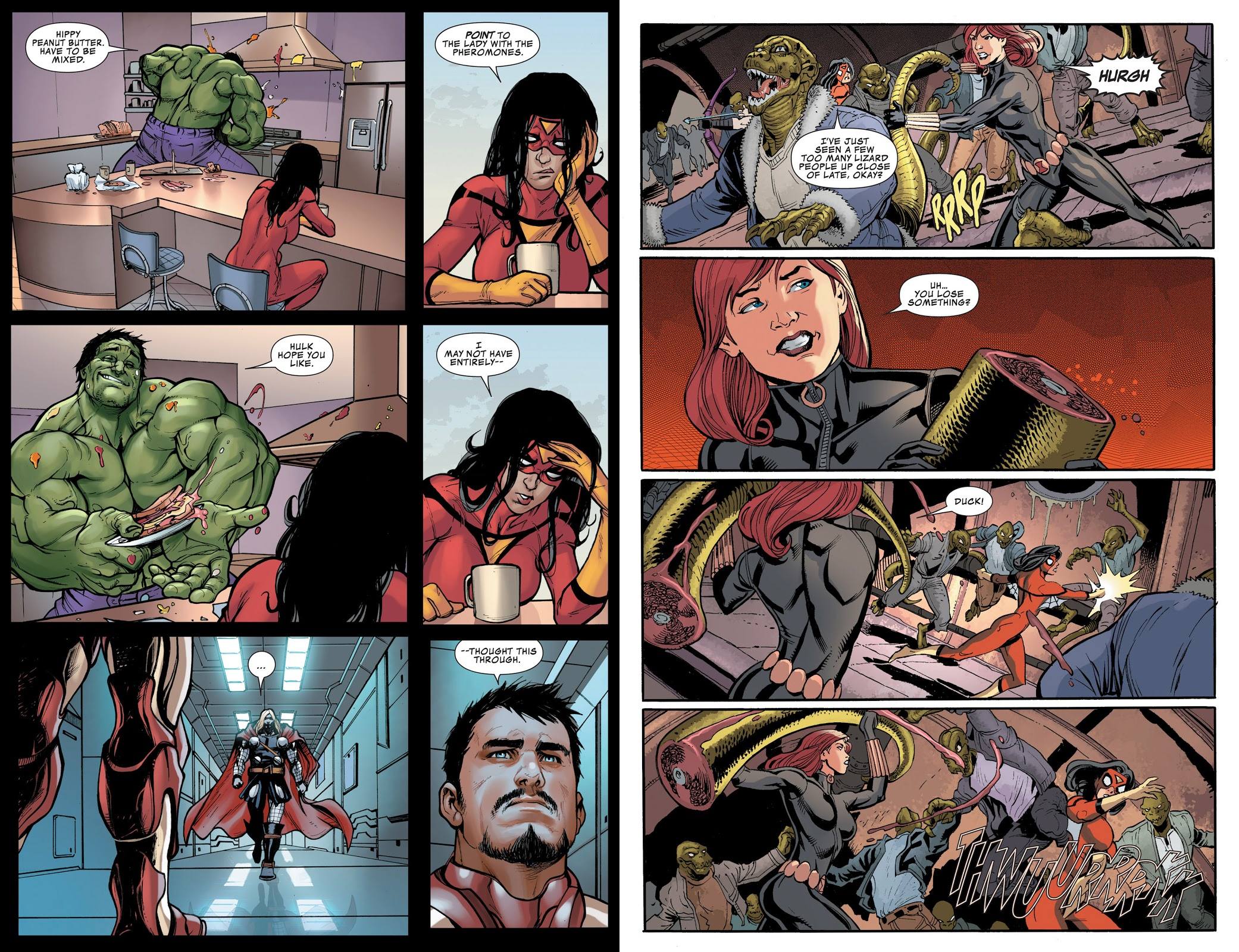 Avengers Assemble (not to be confused with the reprint collections of Kurt Busiek’s Avengers run) was created in 2012 as a series that featured the team of Avengers seen in that year’s movie, i.e. Black Widow, Captain America, Hawkeye, Hulk, Iron Man and Thor. The first story arc by Brian Michael Bendis and Mark Bagley was collected as Avengers Assemble.

In 2013 Kelly Sue DeConnick took over and immediately added Captain Marvel, whose solo series she was writing, and Carol Danvers’ best friend Spider-Woman (though strangely they don’t talk to each other much in this volume). A number of other Avengers are featured in minor roles. Bendis had also used other Avengers as background colour, whilst concentrating on the core six; DeConnick actively shifts the focus to other members. From this point, Avengers Assemble becomes just another Avengers comic – not inherently a bad thing, but the change cancels the original function as an entry-level comic for readers introduced to Marvel superheroes through the Marvel movies.

There’s nothing particularly wrong with these comics – they are decent, well-written Avengers stories. But it’s a little frustrating to hold these up to DeConnick’s other work, as she is capable of a lot better than is seen here.

‘Science Bros’, begins with a stupid bet between Tony Stark (Iron Man) and Bruce Banner (the Hulk). It has amusing moments, especially at the end, when both are judged to have lost the bet; but there are also some very dark moments, and DeConnick doesn’t quite negotiate the balance between the two. Stefano Caselli’s artwork is adequate (sample left), but features some ugly distorted anatomy – not quite as bad as Rob Liefeld in that respect, but still not the most attractive artwork ever seen in a comic. He does like drawing Spider-Woman, though, in a way that sometimes draws voyeuristic attention to her body.

Pete Woods (sample right) and Mark Bagley’s artwork on the second arc is considerably more attractive. Unfortunately, the story is weaker. The Black Widow, Hawkeye and Spider-Woman are dragged into a scenario connected with the Black Widow needing to redeem herself for actions when she was an assassin. There’s nothing enormously wrong with this, but the reader may be tempted to respond to the basic concept with “what, again?” This plot has been seen before, and better; for instance by Marjorie Liu in Black Widow: Name of the Rose. And it would be again better handled by Nathan Edmondson in his Black Widow series from 2014-2015. DeConnick doesn’t bring much new other than some bitchy banter from Spider-Woman.

Overall, this volume, whilst a little better than most run-of-the-mill superhero work, isn’t as much better as it ought to be. DeConnick hasn’t quite got to grips with writing the Avengers here – it seems not uncommon that she needs to ease herself into a series. Fortunately, she is on much better form for the next volume, The Enemy Within.

This volume is rounded out by an Avengers Assemble Annual, an extended tale written by Christos Gage, centred around the Vision. It’s perfectly acceptable, and even emotionally resonant in places, but it’s quite dependent upon past continuity, and takes the title further away from its original purpose. The art by Tomm Coker is all right, but doesn’t take colour well, and seems muddy as a result.

As a final note: the only minority characters in this entire volume are the Falcon in one background shot, and Jessica Jones’ baby. In 2013 that’s not really good enough.