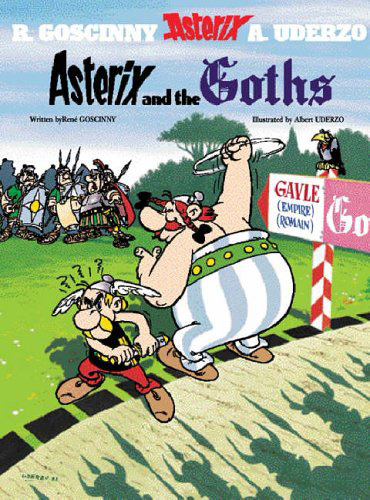 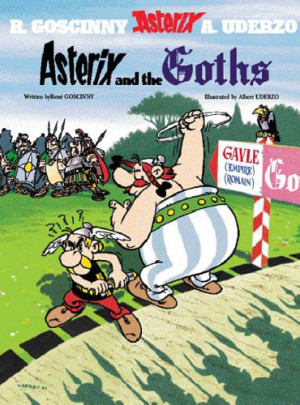 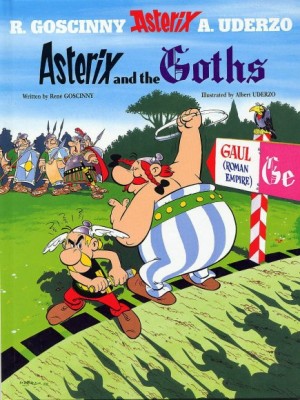 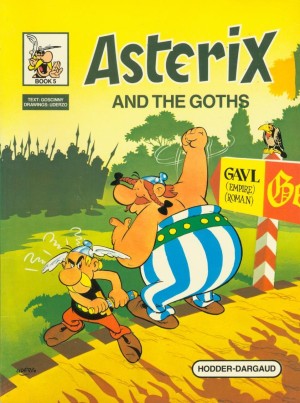 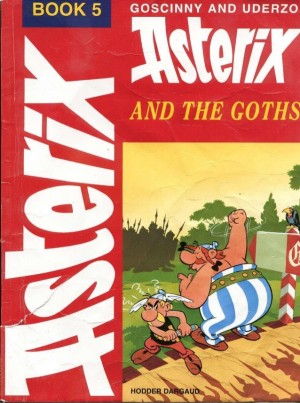 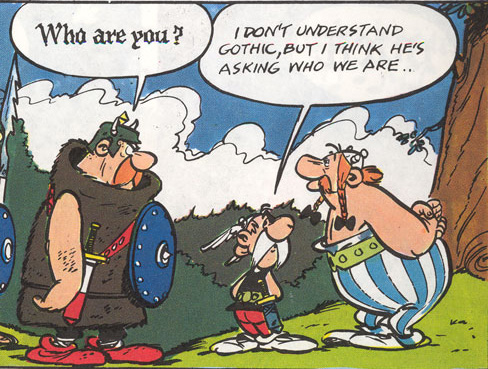 This third Asterix book by artist Albert Uderzo and writer René Goscinny is one of the few immediately following events from the preceding volume, Asterix and the Golden Sickle. Asterix and Obelix decide to escort druid Getafix (with his brand new golden sickle) to the annual druids’ conference, and it’s just as well, because a band of invading Goths aim to kidnap the winner of the Druid of the Year contest and use him to further their evil dreams of conquest.

Needless to say, Getafix wins the competition with his potion endowing the drinker with superhuman strength, so the Goths kidnap him. Asterix and Obelix set off in search of their druid, and there follows a great deal of confusion as they’re initially mistaken for an invasion of Goths. When news emerges that they’re disguised as Roman soldiers, all the Romans start arresting each other, ignoring the marauding band of Goths, or Asterix and Obelix.

Asterix and Obelix infiltrate the Goths using their usual method of finding a couple of similarly sized characters that just happen to be passing. This often proves to be much easier than one might think. Then Asterix and Obelix are also captured by the Goths. However, this highlights a shortcoming of the Asterix books: there’s never any real sense of danger. Even without the magic potion, Obelix (who, of course, fell into the potion when he was a baby) is pretty much indestructible. Although rather than aiming for any sense of real danger, these books were trying for funny and action-packed, a target they hit dead-on.

Goscinny later expressed regret for his war-like portrayal of the Goths/Germans, though it must be borne in mind that fifteen years after World War II anti-German sentiment was fairly common, especially in France. He softened his portrayal of them in later books. The relevance of Asterix’s village never giving in, and never surrendering, in spite of the Roman occupation, probably can’t be over-stated, though it’s impossible to gauge how large a part that particular trait may have played in the popularity of the entire series.

Retrospective political analysis aside, this is a book jam-packed with wit of both high and low varieties. The artwork is slightly less polished in places than the later books, with some characters occasionally looking just a little odd, but many of the elements that would help to make the series such a massive hit had already established .

The never-ending punning can be too much for some, although many younger readers will be unaware of little more than characters having really strange names (Esoteric, Atmospheric, Prehistoric and so on). If you don’t like punning, steer well clear, but if you enjoy clever wordplay (and equally clever translations) in a beautifully drawn story that’s bursting with action, then you’ll surely already be a fan of this superb series.