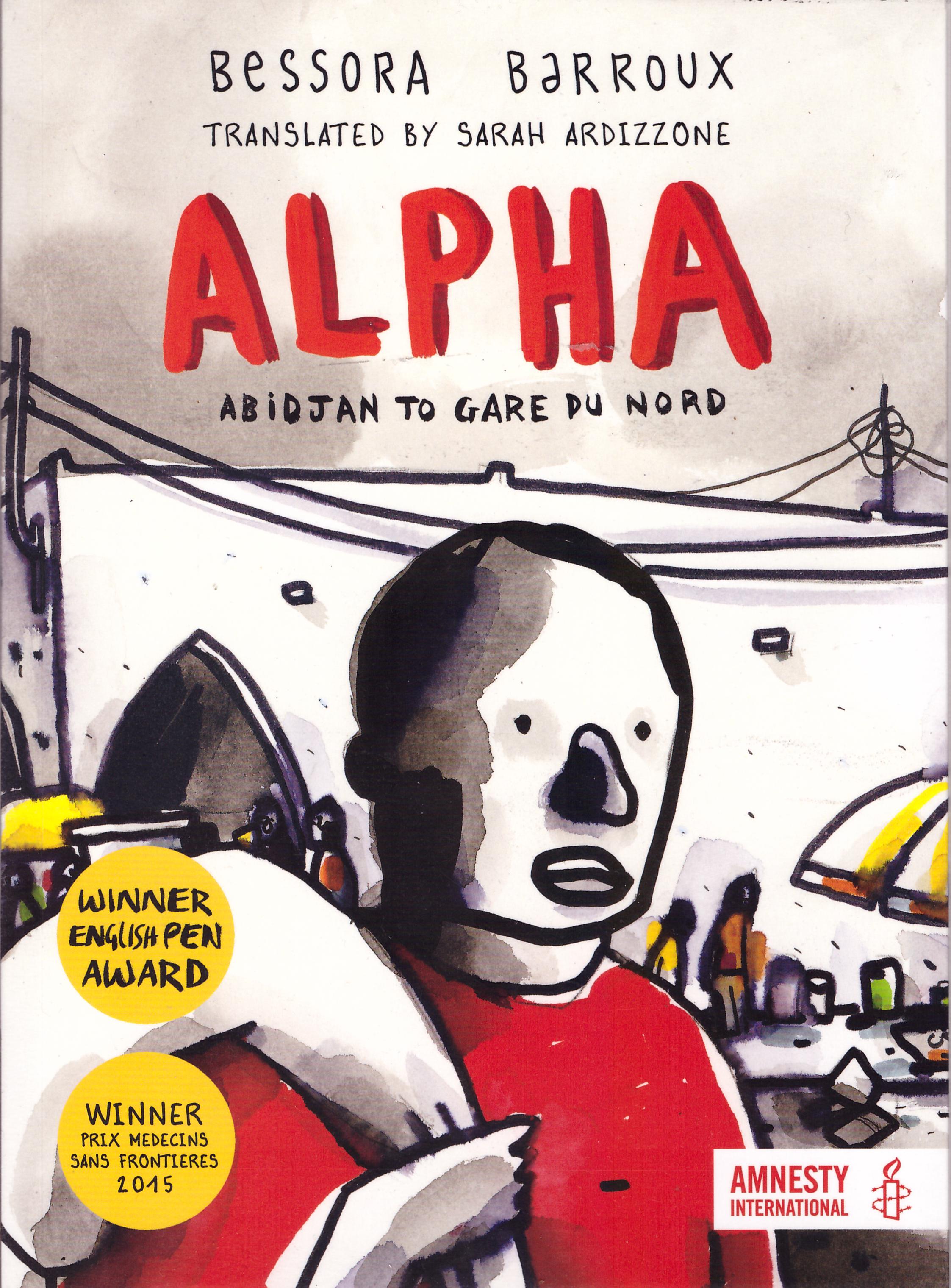 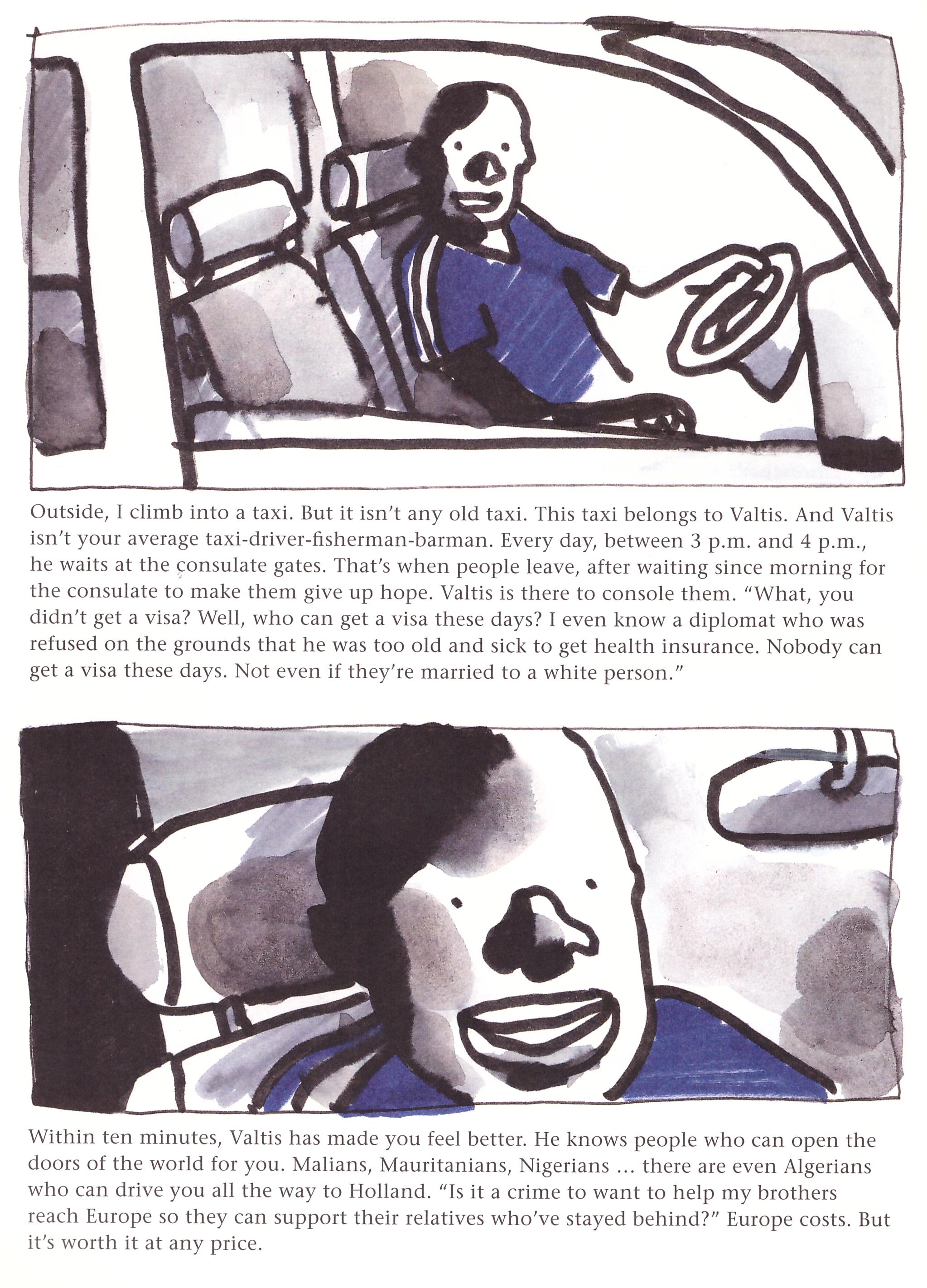 With the topics of refugees and migrants causing societal divisions across the Western world, Alpha was an incredibly timely book in 2016, detailing the horrors of a journey taken from Africa to Europe. It’s a fictional composite, but using real incidents.

The book is presented as two illustrations per page with blocks of text beneath each, much in the manner of newspaper strips like Prince Valiant. Barroux’s art is deliberately simple and primitive, as if illustrated by the amateur whose first person narrative is what we’re reading, but the compositions betray the artistic talent beneath. It’s a viable choice, but fails moments of true terror, which are depicted in the same matter of fact manner as the faceless administrative gump listing the paperwork required for a visa.

That’s the starting point of Alpha Coulibaly’s journey. He has a small cabinet making business in Abidjan, Côte d’Ivoire and wants to visit his wife’s sister in Paris where she has a hairdressing salon near Gare du Nord. This was to have been a family trip, but the visa application process is deliberately designed to discourage rather than accommodate, via a depth of detail very few people can honestly provide. Alpha eventually runs up a debt to pay for his wife and son to take an alternative route, but hasn’t heard anything from them.

Sandrine Bessora Nan N’Guema uses her middle name for writing work, and in very matter of fact language, well translated by Sarah Ardezzone, constructs a catalogue of horror with the loss of dignity only the first step. It certainly prompts consideration of whether over-zealous restrictive travel policies are themselves a partial cause of economic migrants. As the book progresses, desperation becomes commonplace. Many unaccompanied children end up on migrant boats, and we learn how that’s the case, and of the options available for migrant workers in African countries not their own. One of the first people Alpha meets is convinced he’ll play football for Barcelona and is already wearing football boots. Little observations like this characterise Bessora’s story, but the recurring aspect is how faith must constantly be placed in those making promises. Character judgement is possibly the most valuable characteristic a migrant can possess as almost everyone lies about what they can provide, being only half a step ahead of those who’re paying them.

Alpha provides an answer for anyone who’s ever wondered why Africans will climb onto an overcrowded boat to cross the Mediterranean in the full knowledge that several thousand before them have died taking that option. It forms the final section of the book before a written epilogue updating on those encountered over the previous pages. Happy endings are very scarce and measured in degrees.

In keeping with the artistic style and Alpha’s first person narrative, the text might have been better presented as hand-written in preference to typesetting, but that’s a minor design quibble concerning what’s a heart-rending experience.

Even the poorest European person reading this book will live in conditions of comfort unknown to Alpha even at his starting point, and that should give us all pause for thought. As part of their sentence, anyone convicted of any kind of racially motivated crime should be forced to read Alpha from cover to cover, with a test afterward to ensure compliance. 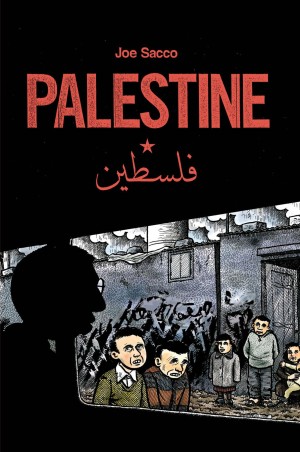