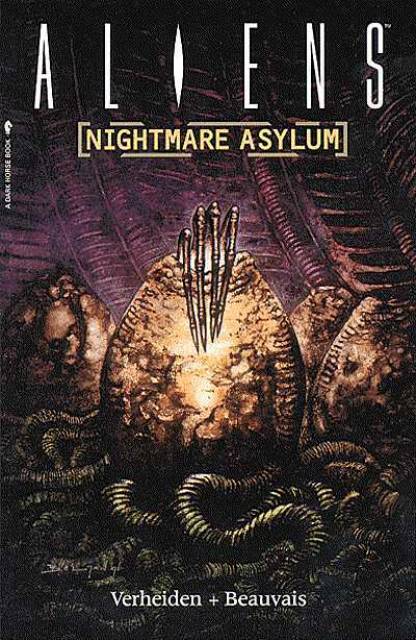 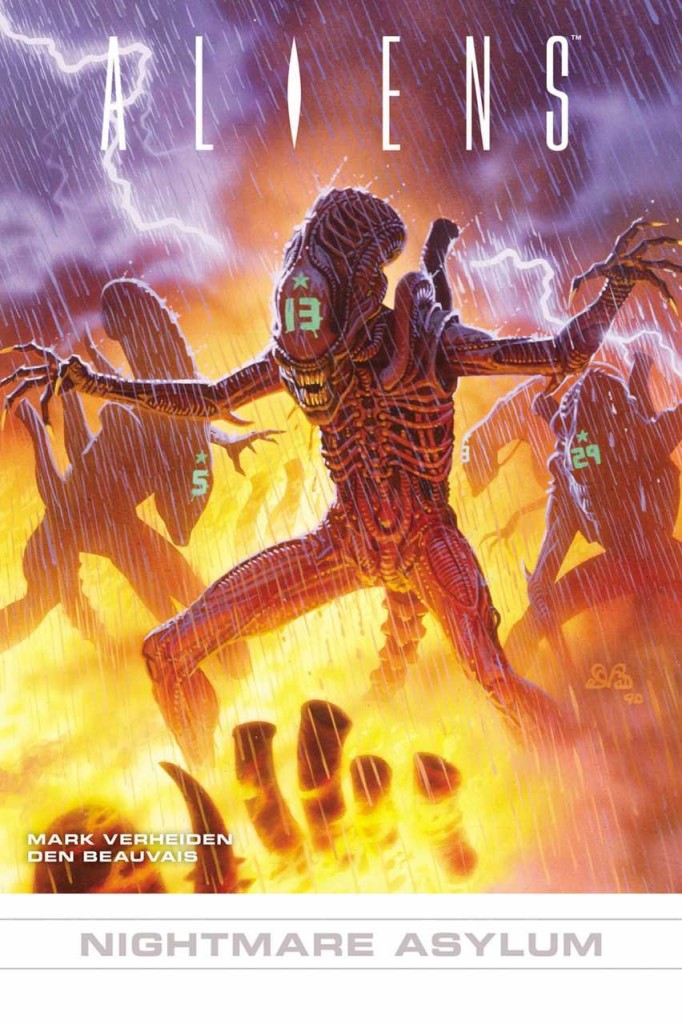 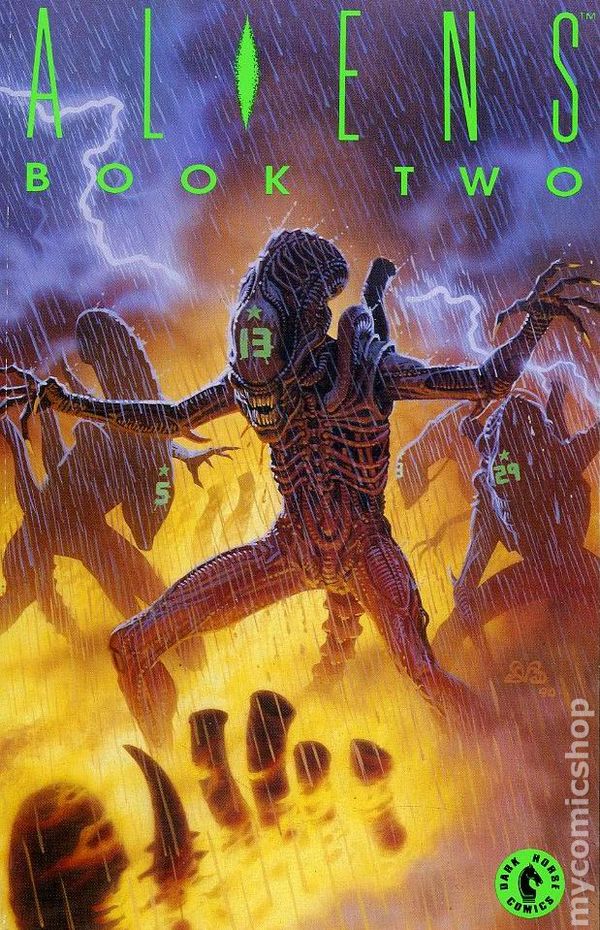 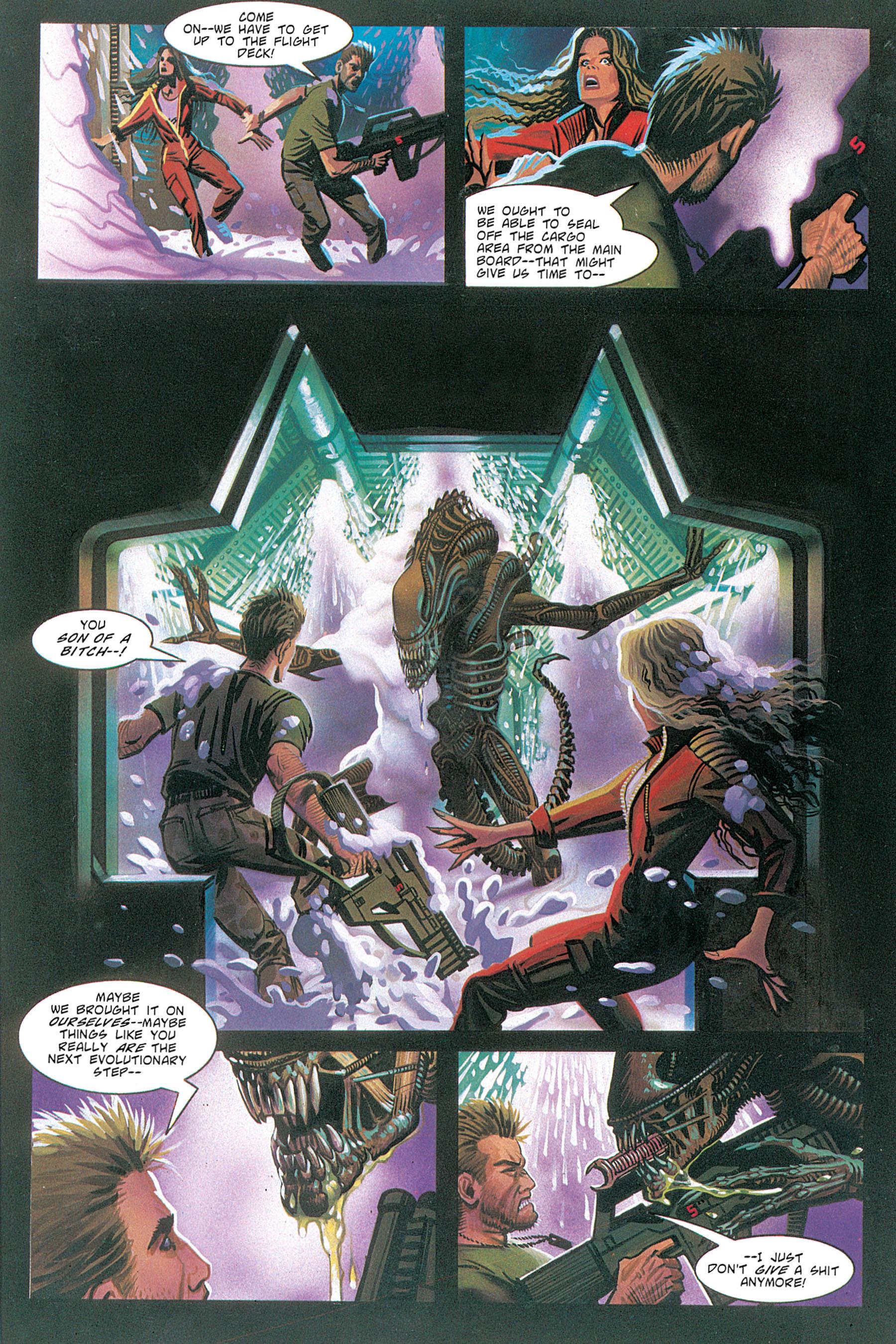 Mark Verheiden’s first Aliens story was very impressive, introducing an element of corporate connivance to Earth’s contact with the Xenomorphs, and delivering quite the surprise ending. It’s not really possible to review Nightmare Asylum without reference to the plot of Outbreak, so anyone who’d prefer not to know shouldn’t read beyond the third paragraph. Both books are collected within the first Aliens Omnibus, although at a slightly smaller page size.

As with the previous book, and indeed the sequel, there are differences. Due to their destinies being officially played out in the 1992 film Alien 3, in all printings from the mid-1990s onward our lead characters are Wicks and Billie. Earlier editions, then titled Book Two, featured Hicks and Newt from the movies.

The artwork is now by Dennis Beauvais, who uses acrylic paints for vivid colours that run contrary to previously established gloom of Aliens. There’s also a static quality to his figures, and an overly sexualised Billie, but his work was highly acclaimed on original publication. Mark Verheiden has a natural instinct for dramatic pacing and delivers another surprise-filled plot, but one that continues into Female War, or Earth War as it was originally titled. He also ups the Alien participation from his first book, with several tense scenes echoing those from the movies with the Xenomorphs on the hunt, and switches the primary focus from Wilks to Billie.

The conclusion to Outbreak saw a corporate experiment to weaponise the Aliens take a disastrous turn for the worse. It left Earth infested with Xenomorphs, from which Wicks and Billie escaped by the skin of their teeth back into space. They’re accompanied by the legless remains of Bueller, a synthetic marine with whom Billie is in love, and, unfortunately for all, also by some aliens who’ve stowed away. Even more unfortunately the ship is programmed to dock at a marine base in space where the commander is unconcerned about any bigger picture while his alien breeding programme is in effect.

As previously, Verheiden provides a pertinent role for all his lead characters, throws in a couple of big surprises (none bigger than the conclusion, at the time at least) and maintains the tension throughout. His plot weaves unpredictably, which is all for the good, but perhaps due to a slight familiarity and perhaps due to the art, it doesn’t quite match Outbreak. Both are collected within the first Aliens Omnibus.